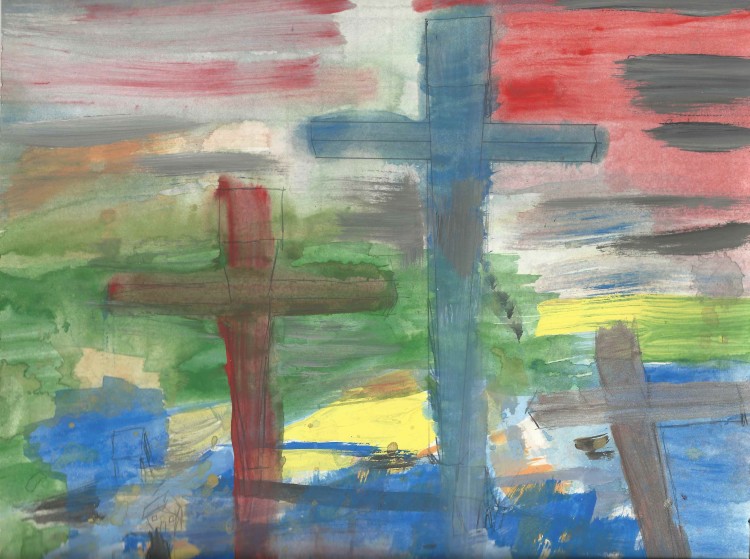 I wrote a piece last Easter on this very day called, “That Confusing Saturday.” It was about how the disciples must have felt after the prior day’s events. PTSD would be a good guess. The trauma of watching who they thought was the Savior of the world, die brutally, seemingly at the hands of men, must have been extremely disheartening. It’s been hard to write this piece as well, focusing on the wounds of Christ. But it’s also been so enlightening to realize each wound had a specific purpose in the redemption of mankind. Nothing was random about the sufferings of Christ, nothing. But as the disciples sat there, numbed with grief by what they had just witnessed, I’m sure God comforted them with the memories of what Jesus said and how he many times expressed the manner and reason for his death. But that still couldn’t erase the horrible pictures of what crucifixion can actually do to a human body.

Today we look at the last two wounds:

1 Peter 2:24
“He himself bore our sins” in his body on the cross, so that we might die to sins and live for righteousness; “by his wounds you have been healed.”
5 But he was pierced for our transgressions,
he was crushed for our iniquities;
the punishment that brought us peace fell on him,
and by his wounds we are healed.
6 We all, like sheep, have gone astray,
each of us has turned to our own way;
and the Lord has laid on him
the iniquity of us all. (Isaiah 53:5-6)

We can see that Peter was probably quoting from Isaiah 53 when he wrote his first letter.  Years had gone by, the Church had grown, Peter had become a foundational part of the First Chruch. But as he wrote his letter, I’m sure he remembered visually the awful sights of Christ’s brutal exit from this world.  Let’s look at the last two wounds and what His suffering bought for us.

The punishment that brought us peace was on Him. Chastening, correction, discipline; the correction of children by their parents. That’s what this word means. What He bore here brought us peace, welfare, soundness. He brought us tranquility, and contentment. This word for peace is so rich with its meaning.  Safe, well, happy, friendly, prosperity and rest are some of the other words used. Notice how NASB says, “fell on Him.” The other wounds cut into His flesh, perhaps this one dealt more with the mental and emotional side of sin fallout, but that’s just a possible insight, not provable, but possible.

The last Wound spoken of is the Scourging.
67 Then they spit in his face and struck him with their fists. Others slapped him 68 and said, “Prophesy to us, Messiah. Who hit you?”
(Matthew 26:67)
26 Then he released Barabbas to them. But he had Jesus flogged, and handed him over to be crucified. 27 Then the governor’s soldiers took Jesus into the Praetorium and gathered the whole company of soldiers around him. 28 They stripped him and put a scarlet robe on him, 29 and then twisted together a crown of thorns and set it on his head. They put a staff in his right hand. Then they knelt in front of him and mocked him. “Hail, king of the Jews!” they said. 30 They spit on him and took the staff and struck him on the head again and again. 31 After they had mocked him, they took off the robe and put his own clothes on him. Then they led him away to crucify him. (Matthew 27:26-31)

By his scourging, we are healed. This is the only time this word was used in the Old Testament. I won’t elaborate on what scourging or flogging is. Most Christians know this. But what is the healing that these wounds brought to us? To sew together, to mend by stitching, this is the word’s primary meaning. To heal, to mend, to repair. This reminds me of getting stitches for a gaping wound. So, as Jesus was being torn open, He was purchasing the way for us to be sewn back together stitched up, healed of all the wounds we suffer both from our own sin and those who have sinned against us.

O the infinite mercies of God. Every possible fallout incurred by the sin of man, was dealt with by the unique wounds inflicted on our precious Savior. So, on this Confusing Saturday, let us gaze in wonder at His love which bought us everything, while costing Him so much. Such is the love of God.

One thought on “The Sufferings of Christ, Pt. 5 ”