I love the Bible stories from the Old Testament.  Some of them are so powerful, so profoundly able to reveal truth to me in such a tangible way.  I don’t understand God’s unparalleled love and grace, It just blows my mind constantly.  I truly, even in my 50+  years have only begun to know Him.  I feel like all the knowledge I have of Him at this point is contained in a single grain of sand, and here I stand staring off into the distance of an endless seashore.  What provoked such a response in me this morning.  Well, it was one of those Old Testament stories.  The story is of three ordinary men, who have been kidnapped from their own hoe and forced to serve a foreign King.  These men, first refuse to each his choicest foods, and now they have refused to worship his foreign gods and images.  Listen to the response they give when the King tries to force them to do so:

16 Shadrach, Meshach and Abed-nego replied to the king, “O Nebuchadnezzar, we do not need to give you an answer concerning this matter. 17 [o]If it be so, our God whom we serve is able to deliver us from the furnace of blazing fire; [p]and He will deliver us out of your hand, O king. 18 But even if He does not, let it be known to you, O king, that we are not going to serve your gods or worship the golden image that you have set up.”  (Daniel 3) 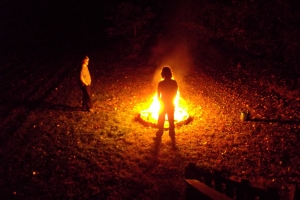 O, how weak my faith is in comparison to these brave men.  Forgive me dearest God.  But the most precious truth that this story revealed to me deeper still into the story:

24 Then Nebuchadnezzar the king was astounded and stood up in haste; he said to his high officials, “Was it not three men we cast bound into the midst of the fire?” They replied to the king, “Certainly, O king.” 25 He said, “Look! I see four men loosed and walking about in the midst of the fire [v]without harm, and the appearance of the fourth is like a son of the gods!” 26 Then Nebuchadnezzar came near to the door of the furnace of blazing fire; he responded and said, “Shadrach, Meshach and Abed-nego, come out, you servants of the Most High God, and come here!” Then Shadrach, Meshach and Abed-nego came out of the midst of the fire. 27 The satraps, the prefects, the governors and the king’s high officials gathered around and saw in regard to these men that the fire had no [w]effect on [x]the bodies of these men nor was the hair of their head singed, nor were their [y]trousers [z]damaged, nor had the smell of fire even come upon them. (Daniel 3)

My mind is blown, not only did Jesus meet them in the fire and walk around with them in it.  Jesus “loosed” them in the fire.  These men were thrown into the fire bound, helpless and all knotted up; but Jesus not only showed up to protect them, He set them free in the midst of the fire that was meant to kill them.  Now I dare not compare my own small little flame of struggle to the fire that these men encountered, but I felt like God was saying to me, “Carole, not only is this fire you are going through necessary, I am in it with you, and their are places in your life where you are bound up and I intend to loose you, right here, right now, in the midst of this fire, in the midst of these flames that you feel will consume you.  You will walk out of this fire unsinged, without even the fragrance of your ordeal  upon you.  Trust Me, Carole, as I walk with you in the midst of this fire.”

I share this with any of you who maybe experiencing a fire of your own.  He is with you, right there in the fire with You, and He desires to loose you from what has you bound.  trust Him, as I am learning to do.  Rest in Him and walk with Him in the midst of this fire.

One thought on “Right here with me, in the midst of my little fire”