Posted on February 21, 2014 by eloracseniah@aol.com

Now before the Feast of the Passover, Jesus knowing that His hour had come that He would depart out of this world to the Father, having loved His own who were in the world, He loved them to the end. 2 During supper, the devil having already put into the heart of Judas Iscariot, the son of Simon, to betray Him, 3 Jesus, knowing that the Father had given all things into His hands, and that He had come forth from God and was going back to God, 4 *got up from supper, and *laid aside His garments; and taking a towel, He girded Himself.

5 Then He *poured water into the basin, and began to wash the disciples’ feet and to wipe them with the towel with which He was girded.

I have struggled my whole life with insecurity and feelings of inferiority.  It has caused me to exalt myself sometimes, or put others down in order to try to alleviate the stress of feeling “unwanted, rejected, or unworthy.”  But as I was reading through this Scripture, years ago, I saw in them the cure for insecurity…knowledge.  But not knowledge the way the World looks at it, not book learning, education, doctorates and degrees.  No, it is a Spiritual, purposeful knowledge that is the cure.

We see in this passage four things that Jesus knew.

Jesus knowing that His hour had come that He would depart out of this world to the Father.

Jesus knew His purpose, His reason for being here on the earth.  Jesus knew His purpose.  As I pondered this, I began to ask God to show me mine, and He is doing so, and it gives great peace and security to know it.  I don’t try to step into positions, or places that I am not called to anymore, I am secure because I know my purpose and can yield to whomever God places over me, trusting Him.

Jesus, knowing that the Father had given all things into His hands,

Jesus knew who He was, and He knew the authority He had in the position that was given to Him.  Jesus’ authority was constantly questioned by others throughout His Ministry.  But He stood firm, because He knew who He was in this world.

and that He had come forth from God and was going back to God,

Jesus knew where He came from, and where He was going.  God had revealed all the 5 w’s and an H, in Jesus life.  He knew the What, Where, Why, When and How of His purpose.  He was fully surrendered to The Will of the Father.  Now, our knowledge can never be that complete, because Jesus is God.  But I do believe that God wants us to know Him, to Know our purpose, and to know the authority we have.  God wants us to know we are His, that He created us for a purpose, we are His workmanship.  God wants us to have the security of knowing where we are going, when our work on earth is done…We are going to be with Him, if we have trusted His plan of Salvation revealed in Christ Jesus.

I still struggle with insecurity, though nowhere near as much, but I am triumphant because God has shown me why I am here, and it is found in this same passage of Scripture.

*got up from supper, and *laid aside His garments; and taking a towel, He girded Himself.

5 Then He *poured water into the basin, and began to wash the disciples’ feet and to wipe them with the towel with which He was girded.

I am called to be a servant, to choose the lowest place, to consider others as better than myself, to wash the feet of my beautiful brothers and sisters in Christ.  Knowledge is power, and Christ knew all He was and all He came to do; so He laid aside his garments, took up a towel and began to wash the disciples’ feet.  Imagine, God washing the dirty feet of people.  If He felt He wanted to do this, How much more should I lay aside all I think of myself and pick up the towel of Christ, the basin of the Spirit’s Living water and refresh the souls of my fellow believers; to wash their feet.  It is a joy and privilege to do so.  And now I can, with joy, because I know who I am. 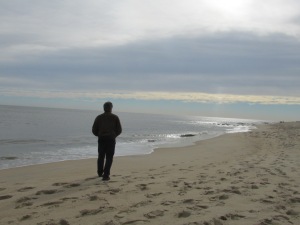 May God's Truth prevail and Love triumph, where we have failed. Amen
View all posts by eloracseniah@aol.com →
This entry was posted in Musings and ponderings and tagged knowing who God is, knowing who we are. Bookmark the permalink.